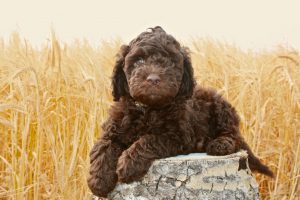 I have found that whenever I talk about my dogs with others, the first thing they ask is soooo what IS the difference between a labradoodle and an Australian labradoodles anyways? The answer is quite a bit actually! The Australian Labradoodle is considered to be a cross between the Poodle, Cocker Spaniel and Labrador Retriever, while the Labradoodle is a cross between the Labrador Retriever and Poodle only. So why the “Australian” you might ask. Simple! It’s because this sweet breed ORIGINATED in Australia. There is no Australian Shepards in the mix.

We are so fortunate that our breeding dogs lines come straight from Australia! Obviously it was generations back, but our puppies come from a long line of Australian Labradoodles. Thats why we can say “Multi- Generational” when we market our pups.

The Australian Labradoodle breed dates back to the 1980’s and was initiated by Wally Conran of Royal Guide Dogs located in Victoria Australia. The intent was to create a breed that was allergy and asthma friendly with the temperament of a service dog. This journey was inspired by a visually impaired woman in Hawaii needed a Guide Dog which wouldn’t aggravate her husband’s allergies. Of the 31 Labradoodles bred at Royal Guide Dogs, a staggering 29 made it through as Guide Dogs… an accolade of unparalleled proportion for this “new breed’ of Guide Dog.

To continue the efforts of Wally Conron, breeders in Australia began breeding Labradoodles determined to produce litters with consistent conformation, coat type, and temperament. During the 90’s, a number of other dog breeds were bred into the Labradoodle lines to assist in this effort. Most often, the English Cocker Spaniel and American Cocker Spaniel were the breeds used; however, it is reported that a few other dog breeds were also introduced into certain lines. DNA evidence of these dog breeds are still found in a few lines today, while others were bred out and not reintroduced into any other blood lines.

Organizations have been formed to protect the continued development of the Australian Labradoodle lines, and guidelines for the continued introduction of English and American Cocker Spaniel are followed carefully. Infusion committees also discuss the merits of other possible dog breeds being allowed careful introduction into select lines. It is an exciting time to be involved in the development of this breed.

Information from the ALAA- LINK

Note: Merle is not acceptable in the bred standard and is considered a fault.

PERSONAL NOTE FROM BAILEY: When I was pregnant, I was very sick. Lets just say I spent a lot of time in the bathroom. Every time I ran in there to throw up Indy came with me. She would put her paw on my back and look at me with very concerned eyes. It actually helped me feel a little better knowing at least she had some empathy for me. This is my personal experience with the breed “knowing” as mentioned above.